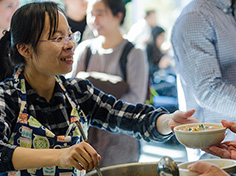 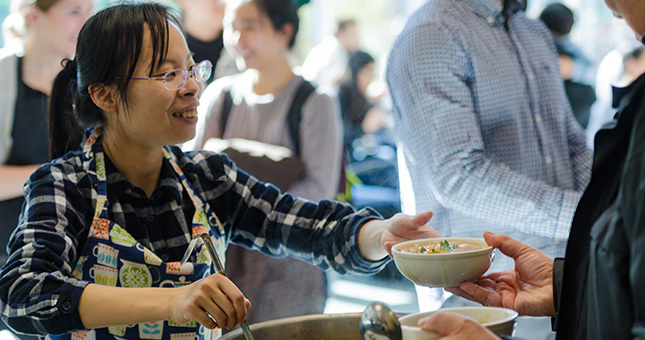 Dr. Christine Pohl taught Christian Ethics at Asbury Theological Seminary in Wilmore, Kentucky for twenty-nine years. Major publications include: Living into Community: Cultivating Practices that Sustain Us (Eerdmans, 2012) and Making Room: Recovering Hospitality as a Christian Tradition (Eerdmans, 1999). She speaks regularly on recovering the practices of hospitality and community.

Derek Witten is Senior Writer and Editor at Regent College and Managing Editor of the Regent World.

In her most recent book, Christine Pohl puts forward four practices for healthy communities. In this interview, we cover just two—gratitude and promise-keeping. Find out why gratitude, spiritually speaking, is anti-pornography; discover the profound counter-cultural power of promise-keeping; and gain a realistic picture of the pain and transformational beauty of Christian community.

Regent College: Is there a single personal experience of transformation that sparked your writing on community?

Christine Pohl: Some of my best experiences of community have been accompanied by really difficult challenges. So it was the combination of the beauty and wonder of life in community with its difficulties—I think that was the most transformational to me. I knew it was important. I knew it was something that Christians desperately needed to know, but I also knew it was very hard. I worked in a congregation with refugees and that was one of the most wonderful experiences of community in my life—it was also very challenging. 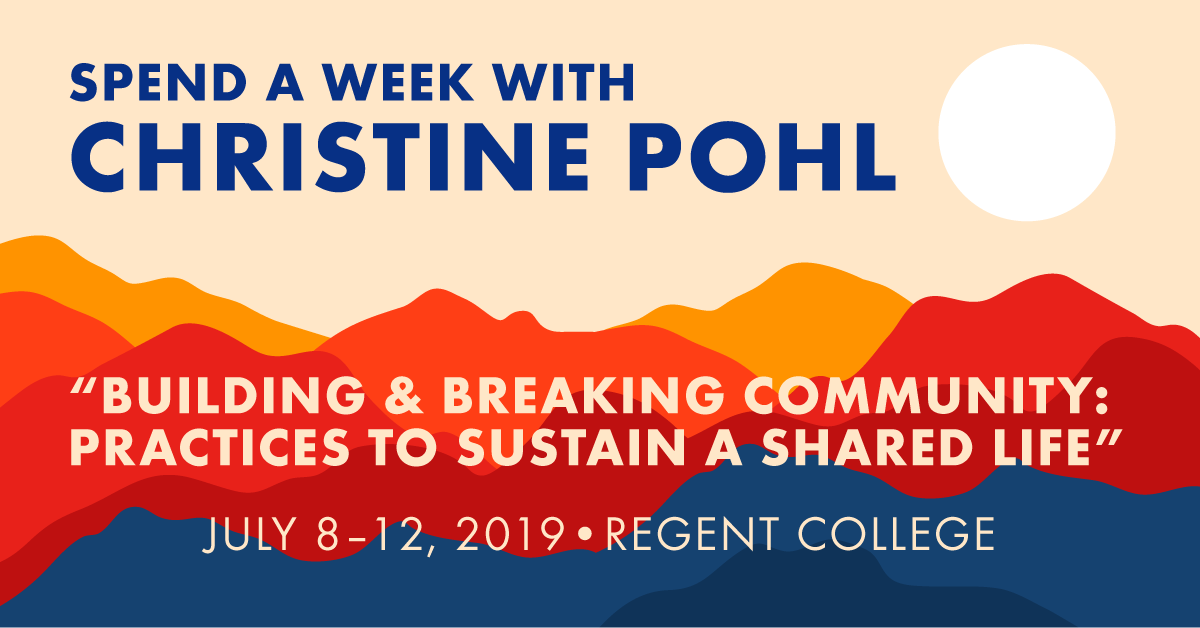 That’s a compelling picture, that mixture of beauty and hardship. Your most recent book focuses on practices. What was it about the language of practices that drew you?

Communities are shaped and formed by the practices they engage in. I follow a particular definition of practices that is laid out by Alasdair MacIntyre in After Virtue, then modified by Craig Dykstra and Dorothy Bass in their books Practicing Our Faith and Practicing Theology. The definition that Dykstra and Bass work with is basically this: practices are things people do together over a time in light of the word and work of God in the world. This tradition seems to me to capture the experience of life in community as well as the experience of Christians searching to be faithful and good. And so it turns out to be a good framework for thinking about the dynamics of community life.

Also, I think our tendency when we encounter difficulties in community life—and this could be a marriage as much as it is an intentional community or a church congregation—our tendency is now to use psychological or therapeutic language, or to use business or managerial language. Those are helpful models, but they are not adequate for addressing life in community. I think that a practices language—whether we are talking about living truthfully or making and keeping promises or hospitality—is language that lets us go back into the biblical materials or the moral tradition and find help in ancient writings in a way that using the more contemporary psychological or managerial language doesn’t.

Right. [Laughs]. You know, I started with hospitality. That’s what I did my PhD dissertation on. I actually wrote that dissertation without particularly thinking in that category of practices.

A couple other practices did come up as well, and they were forgiveness and discernment. And I suppose in a universe with more time and more pages I could have done several other practices. But it seemed like these four cohered and they are practices which are extremely important in the Christian and moral traditions. They are key to God’s character; they are key to Christian life together. So that is how they ended up being the foursome. There could have been others. But books are finite. [Laughs]

Let’s start with promise-keeping. Promises and commitments are often taken lightly today. How can we counter that cultural trend?

In the past, keeping commitments was viewed as fundamental to integrity, to being a good person. I think today we live in a culture where we want to keep our options open. We value maximal choice. With some of the more contemporary technology, it’s easier to leave options open till the last minute. People are afraid of missing out on a better deal. It’s also a consumer mentality.

Today, it is harder to get people to make commitments; then I am not sure they always recognize how important it is to keep the ones they’ve made. And one of the reasons that I addressed this practice is that it is impossible to sustain community if people won’t make promises and commitments to one another—and if they don’t keep them. I mean, everybody fails—occasionally—on keeping promises. Promises fail. There are reasons people can’t keep promises. But if you stop making promises to one another you don’t have a community.

As one person said: “people want to be connected without being encumbered.” People want the experience of community without very much commitment. That simply is not possible. Because no team, no community, can work together if they can’t count on the other people to be in it with them and keep the promises they’ve made.

Stanley Hauerwas delivered the Laing Lectures here a few weeks ago. He used one of his great lines: he described the project of modernity as “the attempt to produce a people who believe that they should have no story except the story that they choose when they had no story.” Is this similar to what you are describing?

I think that we have forgotten the notion of living covenantally. So there are a lot of people that haven’t been shaped by a coherent narrative or story that is larger than themselves. Or [they live by a story] that’s been invented by themselves. We are disconnected from a sense of belonging somewhere, belonging to a community. But I think there’s actually a hunger to go the other direction, which is reflected in [our current] emphasis on story and narrative. We see this in the way we read Scripture and so on. But I do think the trend away from narrative is problematic— if you don’t have some sense of being part of a bigger story, then the practices and commitments that go along with that story won’t make much sense. They become just disembodied rules, or self-constructed dos or don’ts.

Let’s turn to gratitude, one of the other four practices. We don’t often look at gratitude as a practice; we think of it as an emotion. What are ways you can step into the practice of gratitude in community?

I think gratitude is a lot of things. It is an emotion; it’s an attitude. But I think it’s also a practice. And perhaps we imagine that if we’re not feeling grateful we’re done with gratitude. But I think you can learn your way into gratitude. Some of it is modeled; some of it we see in Scripture or in other persons. But if we understand ourselves as truly saved by grace, and formed and loved by a gracious God, then as Karl Barth says, the only response can be gratitude!

I did not understand the significance of gratitude until I started working on it. I mean, you know it intuitively, but you don’t recognize its amazing dimensions. Gratitude gives life to communities; it makes the other practices beautiful; it’s what makes it possible to stay in community over time; it’s the practice of seeing our lives as graced and gifted by God and seeing one another as God’s gifts to our lives. It’s God’s way of showing us grace and goodness.

Learning to love the people we’re with—I mean, it’s not always easy, I don’t want to be naïve or Pollyannaish about this. This can be challenging. But to learn to make gratitude a way of life, to think about the experiences of grace in each day, to make it a pattern, habituating ourselves to a grateful way of living: I think it is possible.

I’ve been talking with a friend who works in a ministry with people who are homeless and one of the things they do together—homeless people, volunteers, and staff—every time they eat together they also share: each person, if they are willing, shares something they are grateful for that day. And you know, she says it changes the life of the community. And maybe it’s ketchup. Maybe it’s that Tara got a job. Maybe it’s another day sober. But it’s something to praise God for; it’s something to be thankful for. I think we can build into our communities times of affirmation where we’re thankful for one another—where we are explicitly, publicly, thankful for something about a person, or something the person has done, and so on. It makes community life much happier. [Laughs]

I think that gratitude has a number of “dark sides”—I would call them deformations. So it’s not actually gratitude, but a really deformed version; it’s parasitic on the practice in a sense. [This “dark side” can be manifested in] grumbling or complaint that things are never how we wanted them, or never good enough. Again, I think that needs to be challenged in community. Sometimes there is what the Rule of Benedict calls “justifiable grumbling.” That’s a description of legitimate dissent, or legitimate criticism. There’s a place for that. But there is sometimes an awful lot of grumbling in community where it almost becomes a way of life and takes over.

Another deformation of gratitude in the Christian moral tradition is envy, which is essentially wanting what someone else has and not wanting them to have it. And—what did Kierkegaard say?—“it’s a small town sin.” It happens in close communities because you are continually comparing yourself to somebody else. It’s actually an incapacity to see your own gifts, the ways that God has gifted your life. So you are always wanting somebody else’s gifts. Envy can make communities terrible. And because it’s such a bad deformation, most people try to hide it; so then you also have deception going on.

Those would be two. I think another sort of deformation today is an overwhelming sense of entitlement that assumes somehow I deserve better than I am getting. [This is something different from a] proper understanding of entitlement that’s associated with dignity and a sense of self.

You described gratitude once as the antidote to spiritual pornography. What do you mean by that?

[Laughs] I quoted somebody who said it. It was a pastor who actually had written that. And he was responding to Dietrich Bonhoeffer’s work, Life Together. Bonhoeffer says if people are always looking for something better in community, always feeling like what they have is inadequate, that the people around them are so spiritually immature—you know, always hankering after this beautiful, idealized community—then what happens is they fail to see the grace that’s there. They fail to see what God is doing in the people; they fail to see what God is doing through the people in their own lives. They miss out on God’s gifts. That’s Bonhoeffer’s point. And I think that’s true!

It’s in always hankering after more—more spiritual growth, growth in numbers, flashier programs, or whatever—that we don’t see the goodness of what we have. We don’t take time to value it and appreciate it. It is a form of idealizing something in the way that happens with pornography, where you have this image, and you cannot see the good in what’s actually real. And I think that’s a really important insight. The antidote is gratitude. It’s thanking God. That kind of gratitude is not a decision towards sloth or not caring about growth in community. I don’t think that’s what Bonhoeffer is talking about there. It’s about being grateful for what we have and growing from there, rather than always wishing we were somewhere else, where things were better.