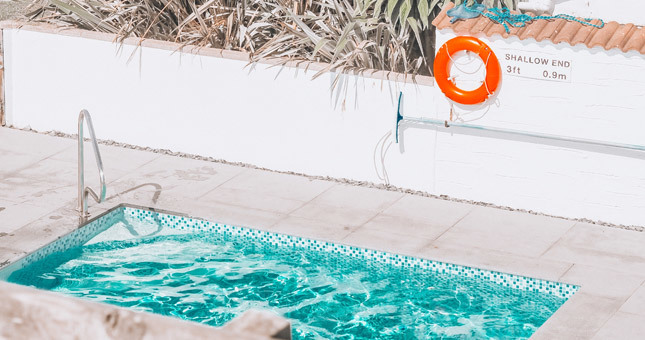 A View from a Jacuzzi

J. I. Packer became Professor of Systematic and Historical Theology at Regent College in 1979. In 1989, he was installed as the first Sangwoo Youtong Chee Professor of Theology. In 1996, he became Board of Governors’ Professor of Theology. He preached and lectured widely in Great Britain and North America, and was a frequent contributor to theological periodicals. His many publications include: Fundamentalism and the Word of God, Evangelism and the Sovereignty of God, Knowing God, A Quest for Godliness, and Concise Theology.

Originally published in 1983 in a precursor to the Regent World, this was a particularly noteworthy reflection on Dr. Packer's theology of pleasure.

The other day I was one of a crowd who spent much of a wet Saturday afternoon in a jacuzzi. My advisees, who formed the crowd, had advised me to try it; you'll like it, they said. Till then I had not even known how ‘jacuzzi’ is pronounced. I had taken it to rhyme with the name of Beachcomber's memorable operatic soprano, Rustiguzzi. (Who was Beachcomber? Why, England's magnificent answer to Stephen Leacock. You never heard of him? I'm very sorry for you. Now let me get on.) I found, however, that the proper rhymes for jacuzzi are words like woozy, boozy and floozie. Whether that is good or bad news I'm not sure, but facts are facts. Previously I had thought of jacuzzis as reserved for hedonists in Hollywood and sybarites in San Francisco, but now I know that under certain circumstances members of Regent’s teaching faculty may also use them. Every day, it seems, one learns something new.

As I sat there savouring jacuzziness, cracking small jokes and adjusting to the feel of being bubbled over from all angles, it struck me that the jacuzzi is the perfect symbol of the modern role in religion. The jacuzzi experience is sensuous, relaxing, floppy, laidback not in any way demanding, whether intellectually or otherwise, but very, very nice, even to the point of being great fun (especially with an advisee group like mine). Many today want religion to be like that, and labour to make it so. The ultimate step, of course, would be to clear church auditoriums of seats and install jacuzzis in their place; then there would never be any attendance problems. Meantime, many churches and electronic religionists are already offering occasions which we are meant to feel are the next best thing to a jacuzzi—namely, happy gatherings free from care, real fun times for all. Happiness has been defined as a warm puppy; this kind of religion projects happiness in the form of a warm welcome to all who tune or drop in; a warm choir with a schmaltzy swing; a warm, back-scratching use of words in prayer and preaching; and a warm, cheerful afterglow (another jacuzzi touch). To the question, where is God? the answer which these occasions actually project, never mind what is said, is: in the preacher's pocket. Soothing, for sure; but is it faith? Worship? Service of God? Is godliness the real name of this game?

As I jacuzzied on, slumping deeper into uninhibited floppiness, I saw why the chromium-plated folk-religion of which I am speaking has gained such a hold. Modern life strains us. We get stimulated till we are dizzy. Relationships are brittle; marriages break; families fly apart; business is a cut-throat rat-race, and those not at the top feel themselves mere cogs in another's machine. Automation and computer technology have made life faster and tenser, since we no longer have to do the time-consuming routine jobs over which our grandparents used to relax their minds. We have to run faster than any generation before us simply to stay where we are. No wonder, then, that when modern Western man turns to religion (if he does—most don’t) what he wants is total tickling relaxation, the sense of being at once soothed, supported and effortlessly invigorated: in short, jacuzzi religion. He asks for it, and up folk jump to provide it. What jacuzzi religion illustrates most clearly is the law of demand and supply.

What, do you ask, has all this to do with Regent? Well, part of Regent’s concern is applying God’s revealed truth to human lives. We pursue that concern academically, in courses on spirituality, present-day discipleship and Christian ministry, and also pastorally, as we seek to shape each other up for mature Christlikeness and capacity to care for others in Christ’s name (the process which Anglicans and Roman Catholics call ‘formation’). So we have to evaluate models of devotion.

What, then, should we say of jacuzzi religion? Certainly, a rhythm of life that includes relaxation is right; the fourth commandment shows that. Alternating hard labour with fun times is right too; all work and no play makes Jack a dull boy, and Jesus so often went to banquets, the fun times of the ancient world, that he got called glutton and drunkard. Enjoying our bodies while we can, as opposed to despising them (which is Platonism at best, Manicheism at worst, and super-spiritual conceit either way), is part of the discipline of gratitude to our Creator. And uninhibited exuberances like clapping, dancing, shouting praise and crying out in prayer can be approved too, provided we do not hereby stumble others. Without these jacuzzi factors, as we may call them, our Christianity would be less godly and less lively, for it would be less human. But if there were no more to our Christianity than jacuzzi factors—if, that is, we embraced a self-absorbed hedonism of relaxation and happy feelings, while dodging tough tasks, unpopular stances and exhausting relationships—we should fall short of biblical God-centredness and the cross-bearing life to which Jesus calls us, and advertise to the world nothing better than our own decadence. Please God, however, we shall not settle for that.

And I could live without ever seeing a jacuzzi again—but I hope I won't have to...