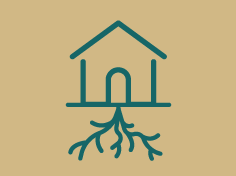 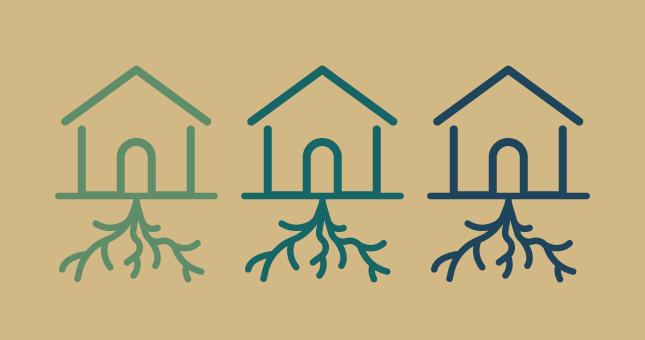 A Tree Can't Live in Space

Jo Swinney (MATS ’04) is an author and the editor of the UK magazine Preach. Her latest book, "Home: The Quest to Belong" (Hodder, June 2017), explores the theme of home via memoir and a retelling of the life of David. She lives with her American husband Shawn, a fellow Regent grad, and their two daughters in London, where Shawn is an Anglican vicar and lectures in theology at Formission College. Read her blog at www.joswinney.com.

The Danger of Over-Spiritualizing Our Sense of Home

I arrived at Regent in the fall of 2000, a 22-year-old from everywhere and nowhere. Despite a fairly surreal argument with the person who insisted I was Australian (she knew what Australians sounded like and was not moved in the slightest by the fact I claimed to have never set foot in Australia), I was English by birth, parentage, and passport. But England was not my home.

By the time I started my Regent studies, I had lived in many places with many people and felt thoroughly disoriented. Until I was five, my family was based in the UK, moving three times for my father’s training as an Anglican clergyman. Then my parents, along with another couple, founded the Christian conservation charity, A Rocha, in Portugal. Portugal became home for twelve years, but Portugal was a somewhat unsettled period, despite the length of time: the faces in the community changed frequently, we lived in four different houses, and I spent the latter three years at boarding school in England. For the following two years, my parents travelled, facilitating the growth of A Rocha into a global charity. Our mail went to my grandparents’ address, our furniture sat in storage, and we gathered as a family in a series of far-flung locations. After graduating high school half-way through this time, I went to Zimbabwe. The following year, with my parents now based in France, I started university in England, and spent three years between both places.

Which brings us to the year 2000 and my arrival on Canadian soil. You can probably imagine the knots I tied myself into trying to answer basic questions about where I’d come from during orientation week!

My peripatetic life is perhaps not the norm, but neither is it all that rare. According to the United Nations, in 2015, 244 million people around the world lived outside their country of origin. A recent Gallup study found almost one in four Americans had moved within the country within the last five years. In London schools, there are over 300 languages spoken. Vast numbers of us are on the move at any one time, whether from choice or necessity. Few of us never have to ask ourselves where we belong.

Rather than panic about my sense of profound homelessness, I found a way to spiritualize the nomadic life I assumed I would continue to lead. It wasn’t hard. I saw myself as an Abram, ready to up sticks and trek into the unknown at the faintest whisper of God’s call. I knew I was blessed, because my “heart was set on pilgrimage” (Psalm 84:5). While others might have the treasure of somewhere to belong on earth, I had treasure in heaven and this, I figured, made me slightly holier. I was like The Faithful in Hebrews 11, “admitting that they were foreigners and strangers on earth” and “longing for a better country—a heavenly one” (v. 13, 16). In fact, I was not entirely unlike Jesus: “Foxes have holes,” he said, “and birds have nests, but the Son of Man has no place to lay his head” (Matthew 8:20). Perhaps one of the costs of discipleship was a relinquishment of the idea of finding home in the here and now. Perhaps the only home I could hope for was in the world to come.

One of the first classes I signed up for at Regent was The Christian Imagination with Loren Wilkinson. The fact such a class was on offer was one of the things that drew me there in the first place and I was desperately excited about it. I had made friends with an actual, real-life artist—Linda—and when it came to creating something for my final assignment, she invited me to come and paint in her studio, an incredible glass box suspended over the water near Lighthouse Park. I hoped that in such a setting and in such company I might be able to produce a passable picture.

A true creative, Linda was always experimenting with new techniques, and she introduced me to the idea of blowing soapy water through a straw all over your work just after you’d got it looking like it might be finished. My picture was of a tree suspended in space, surrounded by psychedelic flares splashed on with bubbly abandon through my straw. The flares were supposed to convey how happy the tree was to have its roots flailing around in nothingness. To state the resoundingly obvious, this tree represented me: uprooted and doing just fine, thank you. In fact, while there were times it was sad and difficult being adrift, I was often thrilled with the joy of the open road. Toad of Toad Hall from The Wind in the Willows captures it well: “Here today, up and off to somewhere else tomorrow! Travel, change, interest, excitement! The whole world before you, and a horizon that’s always changing!”

When I presented my painting to Loren and the class and explained its meaning, Loren’s response stopped me in my tracks. It was one of those moments that you have an inkling might be important but don’t realize until much later that it will actually change the course of where and what your life will become.

It was the beginning of many conversations with Loren, with God, with fellow students and with myself about the meaning of home. The French philosopher and activist Simone Weil wrote, “To be rooted is perhaps the most important and least recognised need of the human soul.”[i] I slowly came to recognise that I needed to find a way to bed down my roots if I was to thrive.  More than that, I had to face the fact that what I had decided to frame in spiritual terms was largely a far less glorious restlessness. I read this passage from Kathleen Norris’ book, “Acedia and Me” with painful recognition: “In a consumer culture we are advised to keep our options open… We head for greener pastures, confident that we are seekers on a holy quest. But soon we discover that no place will satisfy us, and no one person, no group of friends, can meet our needs. The oppressive boredom we had hoped to escape is lodged firmly within us.”[ii]

In the seventeen years since that momentous class, I met and married a fellow Regent student (thus graduating with an MRS alongside my MCS, if you’ll forgive the unoriginal and pretty terrible joke!), moved from Canada back to England, had two children, and moved house four times. My choice to make home in a place does not mean I will never leave it. But I now understand the importance of making where I am home, however short my sojourn.

When the Israelites were in exile in Babylon, the Lord said to them, “Build houses and settle down; plant gardens and eat what they produce… Also, seek the peace and prosperity of the city to which I have carried you into exile. Pray to the Lord for it, because if it prospers, you too will prosper” (v 5, 7). Place is not incidental. Place is the context for discipleship, where our life with God takes on flesh and comes alive. As Walter Brueggemann writes, “Our humanness cannot be found in escape, detachment, absence of commitment.”[iii]

As trees need roots, so humans need home. I’m not afraid of the “Where’s home?” question at social gatherings these days. Home, for now, is here in this place, with these people.  And it can be for you too, if you choose to make it so.