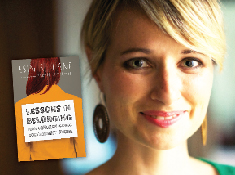 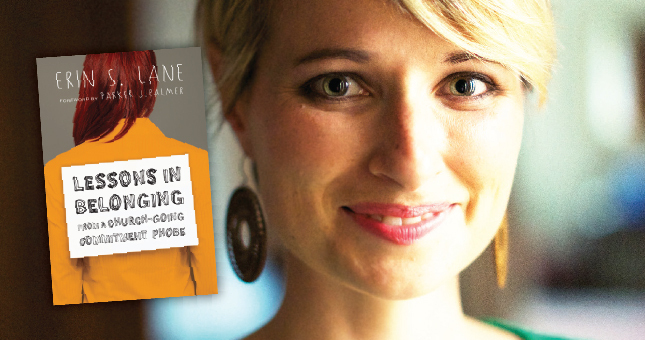 Julia Cheung is a writer in Regent College's Marketing and Communications Department and a freelance journalist, with work published in The Globe and Mail. She lives in Vancouver, BC with the lovable motley crew of her pastor husband and two preteen children. You can find her online at wifeinredemption.com.

A Conversation with Erin Lane

Confirmed Catholic, raised Charismatic, and married to a Methodist, Erin Lane blogs about the intersection of her faith and feminism at www.holyhellions.com. Erin works with clergy and congregational leaders at the Center for Courage & Renewal under the mentorship of author Parker J. Palmer. We recently caught up with her and chatted about her latest book, Lessons in Belonging from a Church-Going Commitment Phobe.

JC: What was the genesis of your book?

EL: It came out of my own desire to explore why I was so bad at community. I’d forgotten the basics of how to be in relationship with people—and specifically with the church—when things got rough. I really like the idea of church, but the reality of church can sometimes be pretty off-putting. So part of this book was my own journey of saying “Why is this so hard? What have I lost as I’ve matured into adulthood and become more independent of community?”

JC: Are the questions that you ask relevant for a completely non-churched person who might be new to the faith?

EL: The lessons seem really basic—and I hope they are. I feel like I need basic lessons over and over again. The first one is “The Importance of Being Earnest”—how this cool detached pragmatism that has become really popular amongst my peers isn’t really getting us the things we most long for. The most interesting revelation as it relates to Christianity was just learning about the word “belonging” in Scripture. There’s no word for “belonging” in the New Testament. Every time you see the word, it is translated woodenly as “you are of Christ.” So instead of saying you belong to Christ, it really just says you are of Christ. But there is this Old Testament version of the word “belonging” that refers to our portion of the sacrificial offering. That’s what really fascinated me—that our response to being totally and wholly of God is to then offer our belonging back. And that our portion is something that comes ordained to us. We don’t get to choose it, but it is part of a communal response to God and no less worthy than anyone else’s part of the sacrificial offering.

JC: How did you frame your book so that you could bring people into that deep understanding of “belonging”?

EL: The book became a marriage book by accident. I realized I couldn’t really talk about belonging to the church without talking about the everyday people I belong to. And one of the people I most belong to is my husband. I look at that verse in Ephesians, a very provocative verse (especially for women) about wives submitting to their husbands and husbands caring for and loving their wives. At the end of it all, Paul says, “This isn’t really about marriage, but about becoming one with Christ.” But marriage is still a really apt metaphor for how we become one flesh with the community. So each lesson has my marriage unfolding as my understanding of belonging unfolds.

EL: My answer to that is “church.” My longer answer is that I’m not really attached to form. But the church does have a function as a public assembly, and we see that phrase all throughout the Old Testament. Then we see evidence of it in Acts and onwards. I don’t know if you can have a coffee date and call it church. It also means it has to be welcoming to the stranger. A church has to be big enough to welcome a stranger, and not have that person feel completely out of place, but small enough for you to find a tribe that doesn’t require as much translation. In whatever capacity you find that, it’s great: whether in a huge church with a great small group, or in a small church that is really missional in the community. There’s that constant tension between public and private, and strangers and friends.

JC: Ah yes, the tension. You love paradoxes. Do I need to have a robust neural capacity (aka be smart) to embrace the complexities of being a church-going commitment phobe?

EL: I would use the word resilient rather than smart! You have to be resilient to hold the contradictions that you face in everyday life. While my faith has never been simple, it has been childlike. When I was five years old, my older brother was taking his first communion. I was so jealous. I thought it was unfair that because he was seven, he was able to take the body of Christ. It sounds ridiculous. I have no memory of how theologically cognizant I was, but I knew there was something contradictory about the fact that this God is freely offered to all—and yet the church had come up with a framework on how that gift could be received. How do we as individuals enter into a community and yield some to that community structure, while also trusting that God speaks to each and every one of us? And so I went home and asked my mom why I couldn’t have my own first communion. We went in and talked to the head of religious education at the Catholic church. The woman sat down with me and asked me some questions and I had my own first communion ceremony. So early on, I learned that those tensions that you come across can actually create a deeper sense of belonging because the church can handle it. The church can handle me pushing back and bringing myself. So you don’t have to be an intellectual. You just have to be resilient.

JC: I’ve noticed a lot of millennials coming back to an appreciation of liturgy, tradition, and structure in worship services, as opposed to freer and more spontaneous worship. Do you identify?

EL: It’s my own story. I grew up Catholic and thought that was boring, legalistic, ritualistic. Once I hit my teenage years and started going to a Vineyard church, I loved the free music and improvisations. But in grad school, I started feeling overwhelmed by the options. There are so many things we could do with our lives, and there are so many kinds of churches we could go to that a lot of people are returning to very simple forms of local church. One practice is choosing the church that is closest to you. That’s a large part of my story. My husband was working at a church 25 minutes away and we only had one car. He has a 12-to 14-hour day on Sunday. I didn’t want to sit around for 12 to 14 hours, so I decided to worship separately at a church I could walk to. That impulse to limit your options will provide some sanity, a sense of rhythm, and will conserve the energy that is required to do modern life right now.

There was a 2013 cover story in Time magazine, where they called millennials the most “threatening and exciting generation since the baby boomers, not because we are trying to take over the establishment, but because we are growing up without one.” So the gift of the church these days is to provide a structure for belonging that welcomes the gifts that we’re bringing, but that isn’t so structured that it doesn’t matter who we are. It is strong enough, [has been around] long enough, and is tied to something more than us, so that we can show up and not have to perform, and not have to maximize, and not have to create something out of nothing. That’s what a lot of us do in our recreational and vocational lives. So having something ancient laid out before us is very attractive these days. If the church seized on that desire for flexible structure, it could make a huge contribution in this shifting institutional life in America right now. [Because] what is particular to my generation is something about the internet culture, the collapse of jobs and the economy, and a rise in un-affiliation with religious institutions, shaking our trust of institutions.

JC: So I have to ask about the resolution. Are you still a commitment phobe?

EL: I’m a child of divorce. My family moved around a lot, even before the divorce. I have a wind-like nature. But somewhere along the line, I developed a fear of disappointment. I didn’t want to commit because I knew what commitment promises and I knew what commitment delivers: it’s never the same thing on this side of heaven. I had a desire to have a thick skin and be self-sufficient, and not enter into the fray of relationships that commitment engenders. Fear of commitment is ultimately a fear of reality. The idea of something is always more romantic than the reality. I was afraid that relationship and Christian community would crush me, that I wouldn’t be strong or resilient enough. But since writing the book, I’ve been encouraged to learn that I do believe in commitment. Commitment is what the cross is all about—to wholly give ourselves away— to commit to a person and to a people like God did. I have recovered that. And the wind-like nature is a gift too. It can signify a gift of flexibility and spontaneity, to go where the spirit leads. I see Jesus and Paul and the disciples being itinerants and not settling down in their Christian witness. That doesn’t mean they are not committed to one another. But they are not stable. So commitment and stability are not the same. There is a way to be committed, and to see that flexibility as something God-like, Spirit-like that I have to offer.

JC: Your story is one of returning, recovering, and coming back home—like the prodigal. But for new Christians who never started out in a churched environment, is there a different message?

EL: I like the idea that we are all prodigals. The book ends with the idea that homesickness is our spiritual condition. All of us are caught between longing and belonging—caught between the cross and the promised land. The only real place where we are going to experience home is as we return to ourselves, which is returning to the God image in us. There is this great line in the prodigal son narrative, where it says the the prodigal son “came to himself.” A lot of the book is about that: coming to myself, inviting people to return to themselves and return to that innate sense of belonging and worthiness that God speaks into our lives. The church is this place where once you recover and recapture that, you can vision and imagine how to invite others into a greater sense of belonging—to creating a world that’s more hospitable to God and to one another.