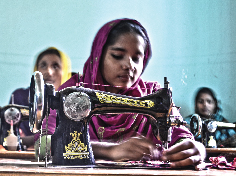 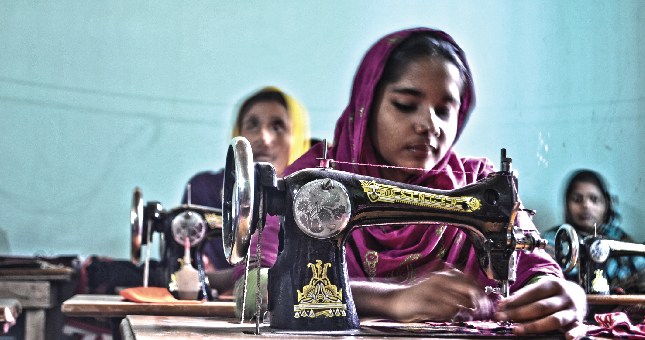 Julia Cheung is Communications Manager at Tenth Church and a freelance journalist on the side, with work published in The Globe and Mail. She lives in Vancouver, BC with the lovable motley crew of her pastor husband and two preteen children. You can find her online at wifeinredemption.com.

Julia Cheung goes on a quest to define what “ethical shopping” really means and how to transform the idea into a personal practice.

Cecelia Cheung is a style maven. She trend-sets with little effort, wore skinny jeans eons before they were mainstream, and can tell you when your infinity scarves, chambray shirts, and ankle boots will be passé. And she’s also no stranger to social justice. She spent two months in Japan volunteering for a disaster relief organization after the 2011 earthquake-tsunami and is a fervent advocate for adoption.

But linking her heart for social concern with her fashion savvy—that’s another story. When I ask her whether she thinks about modern-day slavery and the international garment industry, her response is candid: “I read about it and I feel moved a little. But it’s sort of like a light switch. I want to care, but it’s so far removed that the switch is usually off. When I’m just shopping, I’m not thinking. I’m just looking at the price tag.”

Cheung is not alone. For most shoppers, ethical consumption is the elephant in the room. Price tags easily eclipse our vision.

So how do you eat an elephant?

My first bite into the daunting issue of ethical shopping leads me to Time Magazine’s Lightbox photo, “A Final Embrace: The Most Haunting Photograph from Bangladesh.” It’s a snapshot from the collapse of a Bangladesh garment factory in April 2013 and it depicts the crushed bodies of two factory workers, intertwined with one another.

Worldwide, slavery is illegal. But it still happens. Adults and children work long hours in inhumane conditions, with little to no access to leisure, sleep, education and healthcare.

The fact still stands that billions around the world live in a space smaller than, dirtier than, and less water-tight than my single-car garage or my home office.

Bloggers Michelle Brock (of Hope for the Sold, “an abolitionist charity that fights exploitation one word at a time”), Beth Fisher (who writes about ethics, relationships, and theology), and Ameilia Rana (who blogs about intercultural marriage and all that this entails) all see the garment factory’s collapse as a signal to vote with their dollars.

Beth Fisher decided to change her shopping habits for one year. “Sticking to the status quo in my shopping decisions would have been like saying that my right to cheap clothing...is more important than another person’s right to a fair wage and workable conditions,” she says.

Amelia Rana’s impetus for change is similar, but happens in conjunction with moving into a lower income neighbourhood in Ontario. “My neighbours come from war-torn countries. And with nothing. They think we are loaded,” she says.

As I’ve been doing my research, I’m afraid of turning into a slacktivist. That I’ll have just enough of a taste of the issue to care a tiny bit. And that I’ll think signing a few online petitions, sharing a few articles on Facebook, and arbitrarily avoiding one or two culprits of cheap garment production will be enough to disentangle myself from the issue.

Turning on the light switch

But ethical consumption isn’t just about changing our personal consumption habits. It’s also about convincing as many people as possible to follow suit. And it turns out Cheung’s off-the-cuff reference to her “mental light switch” is also used by academics.

Katherine White, associate professor of marketing at the University of British Columbia is an expert on prosocial consumption and sustainability. White says changing consumer behaviour is exactly like clicking a switch, and that there are three key ingredients to making that switch possible.

The first one, she says, is awareness. It’s important to simply get the information out there.

Secondly, it’s about the right kind of message. “Research suggests if you make your message more concrete or vivid, people will have stronger reactions,” White says. “So on one hand, you do want their reaction strong enough to get their attention. But on the other hand, if the reaction you elicit is too strong and especially too negative, people will actually shut down and they won’t respond.”

White says the third factor is this: “Making the consumer believe that there is actually something that I could do that will make a difference.”

So how do we do this, exactly?

Kelsey Timmerman, author of Where am I Wearing says it’s not necessarily through simply boycotting companies, but by telling the stories of people who work for these companies.

Almost on a whim, Timmerman says he chased down the source of one his graphic T-shirts that had the phrase, “Come with me, my tropical paradise” emblazoned across the front of it.

He ended up in Honduras, and was denied a tour of the factory where the T-shirt was made.

Timmerman eventually went on a global trot, following the source of his food and his clothing. Then he wrote two books about it. “My job is to tell the real stories of these people, to share their personalities, hopes, dreams, weaknesses, to show them as people and to show that we are similar.”

Timmerman suggests that we need to encourage companies who are making positive changes.

“It would be devastating if there were massive boycotts of sweatshops that use child labour, for instance, if there were no social infrastructure for the released child labourers to attend school or to make another viable living,” says Timmerman.

Companies could, for example, chronicle their ethical footprint (as Patagonia has begun to do) and seriously consider the impact of their labour practices on people and the environment.

“You can’t simply reject the whole system and only buy second hand clothes,” says Timmerman. “You need to support the companies who are doing business in a new way.”

Some suggest that we should all just adopt an Amish lifestyle. But a strict return to simple, ascetic living is as drastic as it is impossible. White says, “In order to see broader societal change, we need to focus on the small behaviours, on an individual level. People tend to be influenced by what other people are doing. So by making small choices, you can signal to companies and to your friends and family that you are willing to do something about it.”

White drives a hybrid so she can be part of the change. She says she knows this will not solve the problem of sustainability, but that she’s confident it will make a difference. “When you see the stats added up over a large number of people, you realize that change is possible.”

It turns out my elephant has a name: overconsumption. The antidote? One ethical purchase at a time.

This article was originally published in the March/April 2014 issue of Converge Magazine.