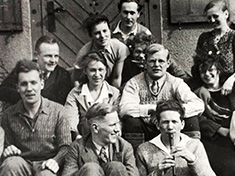 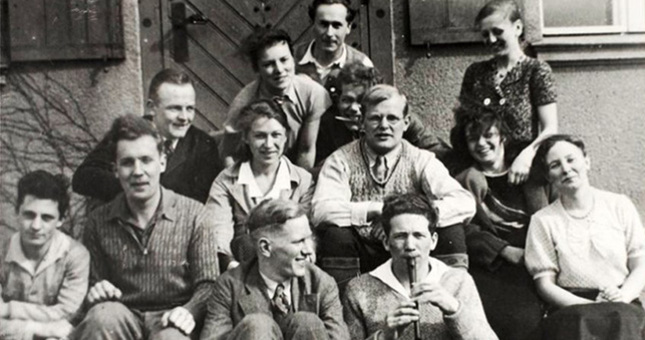 Bonhoeffer and the Community of Foreigners

Dr. David S. Robinson has been a Visiting Scholar in Theological Ethics at Regent College for 2017-18. In August 2018, David will become the Post-Doctoral Fellow in Theology and Science as a part of the three-year initiative to advance conversations about the relationship of theology and science at Regent and beyond, made possible by a generous grant from the John Templeton Foundation. His new book, Christ and Revelatory Community in Bonhoeffer's Reception of Hegel,is forthcoming this month.

The Church as a Creature of the Word

To describe Dietrich Bonhoeffer’s experience of communal life between 1935 and 1937 is to risk what he calls “community romanticism.” For those two years, Bonhoeffer led a small group of seminarians in a shared life ordered by monastic rhythms of study, labour, and prayer. Situated in the small country town of Finkenwalde, Germany, their daily routines were interspersed with lively musical performances and trips to the Baltic coast. The brothers developed lifelong commitments to one another as they prepared for ministries of resistance under a brutal political regime. The community also provided Bonhoeffer with the material for Discipleship and Life Together, books that have had a profound effect on many Christians since they were written.

Given this description, it is easy to think that the Preachers’ Seminary was held together by feelings of solidarity, or by a romanticized view of the church set over and against the tyranny of “politics.” As Bonhoeffer had been arguing for years, these postures could not serve as the basis for a community that was truly Christian. In Sanctorum Communio, Bonhoeffer’s first doctoral dissertation published in 1930, he stated that the reality of church unity could actually be seen most clearly where conflict between groups—“Jew and Greek, pietist and liberal”—was most acute. Such conflict, while seemingly unreconcilable difference, reveals that the church is not merely a national or religious construct. It is a creature of the Word of God.

As the Finkenwalde seminarians largely held a cultural background and a ministerial vocation in common, they did not fully exhibit the challenge, and the promise, of Bonhoeffer’s witness to Christian community. They were not, to adapt a term from Bonhoeffer’s earlier writings, a “community of foreigners” that had no other origin than God’s generative Word. It is therefore worth returning to what Bonhoeffer wrote about Christian community before Life Together, particularly his polemical essays against a law that would effectively remove “foreigners” from pastoral office. For it is in those writings that we find what he identified as the deepest bonds of Christian community.

Bonhoeffer’s academic ecclesiology was put to a decisive test early on. In 1933, the National Socialists had taken power and suspicion of foreigners had reached a critical junction. Churches began to question whether they should adopt the “Law for the Restoration of the Professional Civil Service,” which meant the exclusion of civil servants who had Jewish ancestry. He opposed the enforcement of this law against church ministers, writing several statements that included his “Theses on the Aryan Paragraph in the Church.” In the Theses he argues that such exclusion would compromise the church’s very identity, for “the church is not a community of people who are all the same but precisely one of people who are foreign to one another who are called by God’s Word.”

As a community of foreigners, Bonhoeffer claims, the church has its own distinct identity and should not be caught “emulating whatever the state does.” True loyalty to the state, in his revitalisation of Luther’s two-regiments doctrine, involved the church remaining true to its own free character as church. Bonhoeffer’s argument should not be confused with support for a state-sponsored “freedom of religion,” of the kind he saw embraced by the American churches. Rather, he called the church back to a freedom based on its own proclamation of the gospel.

While Bonhoeffer acknowledged that churches sometimes organize themselves according to cultural distinctions, he insisted that leadership should not be decided on the basis of ethnic profile or a narrow construal of patriotism. As a “racial law” threatened to cut across the pastorate, Bonhoeffer maintained that the dividing wall between Gentile and Jew had been irreparably breached by the work of Christ. The unity of these groups was shown in the baptism that had bound members together with “indissoluble ties.” To adopt the words of Jana Marguerite Bennett, for Bonhoeffer “water was thicker than blood.” Because of this bond, he argued that those who were racially privileged should resign their pastorates to stand with those unjustly marginalized. If there was to be exclusion, then the whole body suffers it together.

Church deliberations under the Third Reich appear far removed from the present. Thankfully, we do not have the same legal manifestation of prejudice when it comes to criteria for a minister’s “fit” for his or her congregation. Yet, subtle barriers remain. The place of “foreigners” is often considered in a manner that casts them as beneficiaries of, for instance, a more inclusive refugee program. We do well to remember, then, that German churches in the 1930s were asking not whether those deemed “foreigners” could be “allowed in,” but whether they could hold pastoral and civil office. They were talking about the exercise of spiritual authority over congregations made up of the majority population. Today, how often do churches honestly confront obstacles to the appointment of a pastor who is an ethnic contrast to the congregation? Could such a contrast be seen as an impediment to “contextual ministry”? Could it be understood as a gift, reminding us of our place in a community comprised “of all nations, tribes, peoples, and tongues”?

How does a church community exist as a social body that is properly contextualized yet not susceptible to the dividing lines of nation or race? Bonhoeffer addresses this dilemma in a 1935 essay entitled “The Confessing Church and the Ecumenical Movement.” He begins by explaining what it means for the church to “confess” its theological inheritance in its unique historical moment: “a confession is the church’s response, as formulated and spoken in its own words, to the Word of God in the Holy Scriptures.” For Bonhoeffer as a Lutheran, just as for Karl Barth as Swiss Reformed, the churches of the Reformation were “confessional” in their struggle to preserve the true unity of the church. The Barmen Declaration of 1934 was an outworking of this tradition.

By saying that the church speaks “in its own words,” Bonhoeffer acknowledges that any confession will have cultural and linguistic particulars. It is a German, or a Dutch, or a Scottish confession. Such distinctions are irreducible, implying that ecumenism should be distinguished from the globalising movement of late capitalism. While a confession is always voiced by a particular people, insofar as it is a response to the one Word of God, it is intricately related to the churches of other peoples. Bonhoeffer therefore writes of “the fact, to which both the New Testament and the confessional writings attest to the fullest, that the church of Christ transcends rather than stops at national and racial boundaries.” As a result, he identifies a counterintuitive link between the isolated, allegedly “sectarian” movement called the Confessing Church in Germany and the broader international Ecumenical Movement. Bonheoffer wryly observes, the link that formed between these church bodies “annoys German nationalists” because they had to “view the situation of their own church from the outside and allow it to be seen from the outside, since no one wants to show their sores to a stranger.”

Returning to the present, Bonhoeffer’s transnational ecclesiology should hold a certain appeal for evangelicals, for their movement has been crossing borders since its eighteenth-century inception. “There was something unprecedented,” Bruce Hindmarsh observes in The Spirit of Early Evangelicalism, “in the dynamic form of expanding transnational evangelical devotion.” It is a critical time to recover this early spirit, placing opportunities for gospel witness before the nationalist impulse to depict foreigners primarily as a threat to security and prosperity.

To that end, here are two characteristics of Christian community, drawn from Bonhoeffer’s life, that can serve to renew evangelical churches today. First, to live as a community of foreigners is to speak out in the cause of justice for those “far” from oneself. The command to neighbour-love and certain accounts of Christian vocation can be distorted to serve the interests of one ethnic group, class identification, or voting bloc. As a result, we stand for “our own” but do not speak out for justice in other peoples’ cases. Bonhoeffer learned to do otherwise, in part because of his observation of racial segregation in America. While attending Abyssinian Baptist Church in Harlem, New York, Bonhoeffer followed the Scottsboro Trials of nine young African Americans in 1931. Calling the situation a “terrible miscarriage of justice,” he petitioned a German church leader to join the mounting international outrage. The reply he received was that a Lutheran understanding of vocation limited one’s responsibility in such a case, to which Bonhoeffer countered with Friedrich Nietzsche’s exhortation to “love of the farthest.” In other words, the advocacy of Christian love should reach beyond national borders and, indeed, church membership.

Second, to live as a community of foreigners is to confront the hard historical truths of one’s homeland. Freedom, as Bonhoeffer argues elsewhere, is not merely freedom from; church members are set free for their nation, in its guilt as well as its promise. This conviction was tested in Bonhoeffer’s own life when, in the summer of 1939, he gave up his status as a refugee intellectual to return to Germany. He felt that his personal safety and comfort were not as important as his responsibility to confront the sins of his nation. Bonhoeffer’s example shows us that Christian freedom does not mean enjoying the privileges of one’s national history while evading its outstanding debts—a selectivity that remains tempting for those of us who have benefitted from colonial histories.

Given the readership of this Regent World Canada’s recent Truth and Reconciliation Commission is especially significant for our present expressions of community. Residential school survivors have exposed a dark history of church and government attempts to eradicate indigenous cultures—an undertaking that sought to avoid the challenge, and relinquish the promise, of living as a community of foreigners. Working toward a response, last year Regent College hosted a conference led by speakers from the First Nations who follow the Jesus way. The gathering allowed those present to hear a vital response to the one Creator’s Word beyond the confessions of British and European settlers. It was an event where Bonhoeffer’s invitation to life together resounded anew: foreigners though we are, by water and the Word we are one people.

For Further Reading: The essays mentioned above can be found in Volumes 12 and 14 of the Dietrich Bonhoeffer Works in English (DBWE), from which citations for this article are taken. They are part of a seventeen-volume set of critical editions published by Fortress Press.