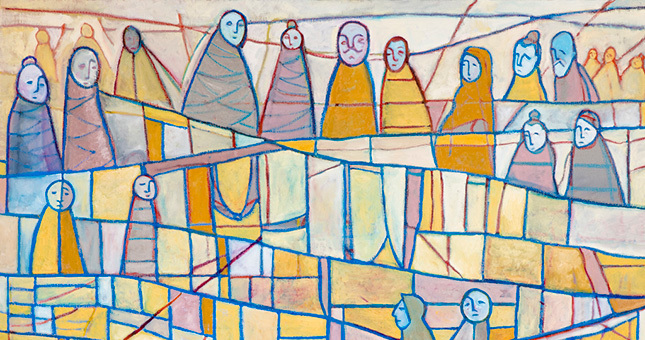 Troy Terpstra is a painter in East Vancouver, where his work is often featured in local galleries and further afield. He has performed regularly with Vancouver Theatre Sports League improv comedy troupe. Most recently from Bellingham, Washington, Troy completed his MATS at Regent College in 2018.

Employing the cultural insights of Rene Girard, a painter uncovers the inner workings of community life.

Paintings aren’t the usual place we look to reveal the complexities of community, but often art offers insight that we might otherwise ignore. Painter Troy Terpstra, studying the renowned cultural theorist Rene Girard, found mimeticism to be a provoking concept and portrays its dynamic in his own work. In this essay, he explores this influence, the notion of how our desires, and in turn our communal actions, are shaped by each other.

The observation that human beings imitate one another in their desires has been made throughout history. Plato claimed that humans were the most imitative of all the species. In my own understanding, Moses, in the Decalogue, at first enumerating those things that belong to our neighbor (their house, spouse, animals, etc.), gives up listing those potentially enviable objects and names the source of covetousness itself: the neighbour.

French cultural theorist Rene Girard insists that it is the neighbour who is the source of our desires. Though we have no problem recognizing the role that imitation plays in the desires of children, most of us would have some difficulty accepting that our desires come from those around us, instead insisting on a romantic doctrine of authenticity and hyper-individualism. Girard names this to be “the romantic lie,” a notion that we tell ourselves in order that we might safeguard our idolatries. We can no longer keep a straight face if we refer to our culture as “sexually repressed,” but Girard guesses that the true repression of our age is envy. We live in a world where we are forever claiming to be our authentic selves, while simultaneously looking out of the corner of our eye to see what our neighbors are up to. The global addiction to social media is little else besides this askance gazing. This gazing and its repercussions for the communities in our lives are not just deep, but daunting. Though the technology is ostensibly for “bringing us together,” it is increasingly clear that the more we monitor each others’ lives through screens, the more isolated we become.

Reflection on Social Dynamics: In this piece, I portray mimetic personhood and borrowed desire in community. Above the surface each person appears separated. However, under the fractured surface, it is difficult to tell where one begins and another ends.

It is impossible to do justice to the subtlety of Girard’s mimetic theory with a simple explanation, but it is essentially the notion that our desires arise in imitation of others in their desires, rather than inherently from ourselves. This imitation gives rise to rivalries and violent conflicts. Consider Shakespeare’s Antony and Cleopatra: when one of Antony’s friends observes the growing conflict, he comments, “that which is the strength of their amity shall prove the immediate author of their variance.” Girard asks, “What kind of creatures are we, that the strength of our friendship can be the author of our conflict?” Mimetic desire, in other words, is that which brings us together, as well as that which tears us apart. Indeed, all learning, all cultural transmission, language and custom alike, are passed down through imitation.

Besides positive mimesis, there is also conflictual mimesis. Two friends become close because they share taste in music, art, food, and all manner of jokes and experiences. They serve as models to one another for their desires, since our desires always require models. This is the impetus behind the entire advertising industry. We see a model in our own desires (frequently an actual model) and fortunately, there are plenty of bottles of Coke and pairs of jeans to go around. Yet when the object is scarce (whether a single lover between friends, or a single fellowship between colleagues), the closest of friends can suddenly become the bitterest rivals. Girard’s insight is again nuanced through Shakespeare: “The strength of our amity is the author of our variance.”

According to Girard, the imitative nature of human desire, which paradoxically brings humans together and tears us apart, is that which allows for the development of human culture. In his second major study, Violence and the Sacred, Girard demonstrates how the building up of mimetic conflicts within archaic societies is resolved by the universal and accidental discovery of the scapegoat mechanism. This is a collective dynamic human experience rooted in the same mimetic desire, which unifies human desire towards the expulsion and lynching of a single victim. Girard claims to have solved the riddle of the paradoxical nature of archaic divinity, namely, that it is both beneficent and maleficent with this hypothesis, for the victim is bad (inasmuch as it is held responsible for the crisis) and good (inasmuch as it is responsible for the resolution of the crisis and the tranquility which follows). If indeed we are the reciprocal creatures that Girard claims we are, then we can see the danger of internal violence and blood feuds in archaic culture. It is difficult for any of us to imagine such a world, since our functioning judiciary essentially acts as the arbiter of vengeance for all violent transgressions, but in a world with no such institution, the continual duty of reprisals would be more than sufficient to wipe out a human community.

The scapegoat, unanimously condemned by the crowd, gives the community the advantage of ending the cycle of revenge. With no one to advocate for the victim, his guilt will not be questioned, and the violence can come to an end. With this concept, Girard offers a masterful interpretation of Greek myth, showing these stories as scapegoating episodes: no witness to the innocence of the victim survives, and therefore the victims of myth always come down to us as divine, monstrous, or guilty of some heinous transgression. Oedipus, as the story goes, really has committed patricide and incest, and thus is responsible for the plague of Thebes.

Throughout the last few centuries, Christians have had some anxiety in grappling with the claims of ethnologists, those rigorous observers of culture who saw in primitive religion a multitude of “death and resurrection” myths, and concluded with confidence that “the Christian myth” was nothing more than a successful version of this prolific tale. Girard (whose anthropological research resulted in his conversion back to the Catholicism of his childhood) admonishes the church not to recoil from such comparisons, for our embarrassment will hide a great apologetic gem. We ought to compare myth—Greek, Mesoamerican, or otherwise—to the Judeo-Christian texts, for in so doing we will see not only the numerous similarities and symmetries but also the one stark and recurring difference! In the Bible, unlike in myth, the victim is innocent, and the crowd is seen for what it is: a lynch mob.

The Scapegoat: The crowd on the left is united against the victim, who stands accused with no advocate. Terms such as Satanos (accuser) and Paraclete (advocate for the defense) are important in Girard’s anthropological reading of the both myth and the Gospels.

From Abel, whose blood cries out to Yahweh, to Job who “knows his defender lives,” despite being socially ostracized,  from Abraham’s incredible move away from child sacrifice, to the Suffering Servant, who was “hated without cause,” and culminating in the Gospels, Girard (reading as a cultural anthropologist, rather than a theologian) shows how the Bible is essentially the “anti-myth” and reveals the scapegoat mechanism at the heart of all culture. The light which the gospels shed on our tendency to make order through murder is sometimes staggering in its clarity, as when Caiaphas claims, “It is better for one man to die that a nation might live.” Jesus then takes the final step in deconstructing the cycle of mimetic violence, demonstrating not just awareness of the scapegoat mechanism, but a willingness to step into the role of the scapegoat himself. Jesus offers, for the first time in human history, the possibility of a new form of human community, one built on “the cornerstone that the builders rejected.” Just as with the conversions of Peter and Paul, today we can only become free of our participation in violence by recognizing ourselves as persecutors, a realization only possible because of an encounter with the resurrected Christ.

God has made us in his image. A basic theological anthropology must conclude that we can only become who we are by becoming like someone else. We call this “discipleship.” Jesus affirms our mimetic predisposition when he says, “I only do as I see the father doing,” and Paul, likewise, when he admonishes, “Imitate me, as I imitate Christ.” We have been freed of our slavery to the satanic cycle of scapegoating and murder. We have been given another body to gather around: one that we must admit we have helped to crucify, but also one that has returned to set us free from our violence.