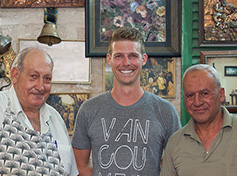 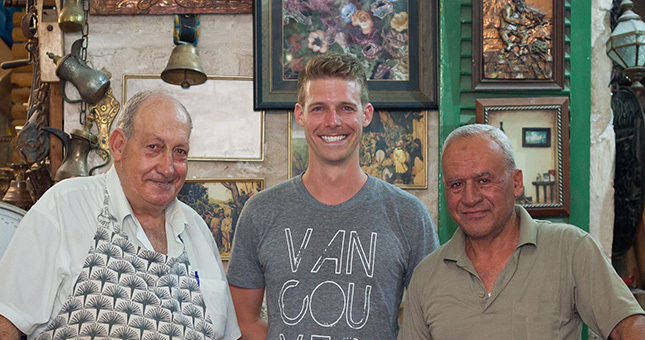 Art and the Other in the Holy Land

Corey Janz is a writer and musician, currently completing his MA in Christianity and the Arts at Regent College. In 2016, he was awarded the Conway Holy Land Travel Bursary for research in Israel and Palestine. In this interview he reflects on the experience.

Amy Anderson (MA Old Testament '16) is the Director of Communications and Public Engagement at Regent College.

An Interview with Corey Janz on Palestinian and Israeli Art

Tell me a little bit about what home means for you.

Well, we say home is where the heart is, and where the people that you love are. And that’s true, but home is also associated with land: the place where your personal history and your people’s history have happened. The identity of a place becomes more full as we have more history in it.

You just went to the Holy Land: tell me a bit about that.

I was travelling there for just over three weeks. The trip came about as a result of the generosity of Dr. John Conway, who offers a bursary through Regent College for one student every year to spend some time in the Holy Land.

Last year I studied theology of place and its implications for the arts. I applied for the bursary because I was intrigued to see how some of those theories would land in the real world, in a place that is contested. In Israel and Palestine, the Holy Land—whatever you want to call that little space between the Mediterranean and the desert—two different people groups are staking a political claim on the same land. I wanted to understand more about the cultural identity of both of those people groups and, specifically, how that identity comes out in their artistic expression.

How did you approach that question?

I just tried to meet as many artists as I could, and see and hear and taste as much art as I could.

One piece that I found really compelling was in the Tel Aviv Museum of Contemporary Art. There’s an exhibit by a Jewish graphic artist named David Tartakover. He had one piece that was extremely simple: all it was was a beht, a yod, and a toph, which in the Hebrew language is bayit—home. But the beht was red and the yod was black and the toph was green: the colours of the Palestinian flag. So it was this really tense, interesting statement, expressing really effectively the fact that there are two people groups who claim this land as their home.

I also spent some time with Zaki Baboun, a Palestinian Christian painter in Bayt Jala, just outside of Bethlehem. He’s a good artist, but he mainly does souvenir art. The typical thing he would sell is a thin slice of olive wood with Mary, Joseph, and Jesus painted on it. But every once in a while he does a larger, more political piece.

He showed me a canvas of Mary and Joseph travelling on a donkey. They’re trying to get to Bethlehem, but there’s this massive separation wall that’s blocking them from getting in. So what he’s doing is taking his traditional religious art and inserting into the midst of it the everyday reality for Bethlehemites right now. So: just a simple painting, but pretty political.

What did you learn about the identity of the people and how that’s caught up in their land and their art?

Well, I just think one of the biggest surprises was that most of the art is not blatantly political. It’s not about the wall. It’s not about running out of water. It’s not about the other political conflicts that are happening: it’s just about art. I spoke with an arts prof at Dar al-Kalima, the university of art and culture in Bethlehem. She told me, “We keep stressing to our students that our lives are more than just politics.” And for me, that was really powerful.

Politics are important, but so is art, so is personal expression, so is expression of religious worldview—all of those things. Art has a part to play in all of the various facets of life, not just politics. For some reason, I thought that because the political climate in Israel and Palestine is so topsy-turvy, most of their art would be political, which was silly. It was a bad assumption. And I was happy to be shocked out of that assumption.

What did you learn about the link between local identity and connection to the land?

I had a lot of conversations with Palestinians in Nablus, in Bethlehem, in Ramallah. The overall sentiment—sometimes it was a direct quote—was: “We will not accept the occupation.” I spoke with many refugees who said, “I’m a refugee. I used to live in Jerusalem (or wherever), but now I can’t get back.”

It’s pretty heartbreaking. Generations and generations lived in one place, one house, tending the same olive trees. And all of a sudden that’s severed: the family is forced to flee from home and live in a refugee camp. There seems to be a lot of magnitude to that severance after being in one place for such a long time. So land is still quite important to the Palestinian identity. A lot of Palestinians view themselves as people in exile.

One guy in Nablus, Mustafi, told me, “This has been the shortest occupation so far, and it’s not going to last much longer.” He was very confident in that. He didn’t fear for the future because he saw Palestinians as a resilient people who have always been occupied and yet retain a strong Palestinian culture.

What did you learn about Jewish identity in relation to the land?

Hanan Schlesinger is a rabbi who lives in Gush Etzion, which is a settlement within the Palestinian border. In the eyes of the international public, that’s illegal, but he is an ardent Zionist. He believes that the Lord is giving the land back to the Jewish people and will continue to do so.

Schlesinger compared the situation of the Jewish people to a movie that has been paused for the last 2000 years: now, finally, the drama is going on again. That’s how important he feels the last 60 years have been. So his residence in Palestinian territory, in a Jewish settlement protected by the military, is both a political and a religious statement. And he’s very excited about the refounding of Israel as a people in a place—his people in their place, in his view.

How does that relate to his understanding of the Palestinian people?

Well, that’s interesting, because even though Schlesinger is an ardent Zionist, he’s also for the Palestinians. He’ll talk about the first 35 years he lived in Gush Etzion and say, honestly, “for those 35 years I viewed Palestinians as part of the background.” He didn’t really consider their welfare or point of view. But over a series of events in his life, he suddenly realized that he had to come to grips with the fact that the Palestinians are a people unto themselves, who have their own perspective.

What was your own response to this experience of seeing people—Jewish and Palestinian people—who are living almost side by side and yet so separate?

It’s really weird. It’s also really sad. Palestinians and Jews each ride their own buses: if you’re Palestinian and you’re going into Jerusalem, you ride the Palestinian bus. If you’re Jewish, you ride the Jewish bus. And it’s not just that: they listen to different news agencies, watch different television, have different languages, different alphabets, and different religions: everything that gives them a sense of personal human identity and cultural identity is divided. Only the land is the same. I can’t think of any other instances in the world where that’s currently the case. People often compare it to South Africa during apartheid. I don’t know how to describe it.

You wrote on your blog about a few instances of art being made by people not from there, but speaking into the political situation. I’m thinking about the graffiti on the wall and of your friend Walter, who is living in Bethlehem. What was your take on that?

Well, Walter is in love with Palestinian culture. He lives in Bethlehem: he’s been there for a year, he’s studying toward a master’s in peace-building in Bethlehem Bible College, and he’s utterly committed to giving a voice to the oppressed. As far as a foreigner can understand and be part of the situation, in my opinion it’s people like him. He’s there. He’s living there. And he’s seeking to understand through the experience of actually being there, and being subject to it.

That’s why I’m loath to make political statements: because it’s a complicated issue and I don’t live there. There are people who were born there and that have grown up in that situation. But as far as westerners go, people like Walter are on the best track to being able to make statements, because they’re living it: they’re investing their entire lives in it.

In terms of the art on the wall, I don’t know what to think of it. This is a very sweeping judgment, but I think that a lot of the art is sentimental. It’s inwardly aimed: “I am going to visit Palestine, I am going to spray-paint some beautiful art in solidarity with the Palestinians, and then I’m going to go home and feel like I’ve done something grand.”

Jeremy Begbie makes the point that sentimentality avoids costly action. And I worry that we can make art and feel good about standing in solidarity when really we’re just preaching to the choir and then going home and doing nothing. There’s no art on the Israeli side of the wall, and really, I feel like that’s where it should be. The Palestinians don’t need any convincing that there’s something wrong. I mean, it could be used to try to encourage the Palestinians, to try to say that there are people that are standing beyond these walls. And there are people that are like that. But my guess is that most of it’s sentimentality.